skip to main | skip to sidebar

This document is particularly useful for people in Institutions where multiple Proxy Servers are deployed, for instance Engineering Colleges. In such places, often we feel the need to change the proxy configuration several times in the course of a small time interval primarily due to either or all of these reasons:

i)One proxy doesn't let you open Youtube or Rapidshare (or any other website for that matter) while the other does.

ii)The proxy server you're using is currently down.

iii)Certain Websites are cached on one particular proxy server so they're faster if accessed using that Proxy Server.

iv)You like switching between proxies and you do it for the heck of it.

As the title might have suggested, this post is about using an addon in Firefox to do the task of switching proxies easier. If you are curious enough, you might've already googled on this topic or searched for Firefox addons from the Firefox>Tools>Addons applet. There are a number of addons to achieve the task at hand, namely SwitchProxy, MM3-Proxy Switch, Quick Proxy, Foxy Proxy, xyzProxy, Ticon, ProxyFlag, ProxySwitch; the list is quite long. The particular addon I use and I recommend using is “MultiProxy Switch”, and I list the reasons for this choice I made:

i)Most of the addons in the list are meant for only one proxy and they merely toggle it on/off which makes them useless for use in a multiproxy environment.

ii)SwitchProxy, perhaps the uncrowned king for achieving the task has not been updated since 2007. Firefox, on the other hand has been evolving rapidly ever since and its latest version 3.5.2 hit the world recently. Needless to say, SwitchProxy is not compatible with the later versions of Firefox.

iii)Most other addons are also incompatible with the latest Firefox.

iv)Foxy Proxy performs the task but it is a pain in the butt to configure it properly. It has no No-Proxy list which you can edit; rather it asks the user to manually feed in regular expressions/ wildcard sequences of instances of URLs and black-list/white-list them. This is a cumbersome task and not all of us are comfortable with wildcards and regular expressions. After spending half an hour trying to add the blacklists, I was frustrated at the sight of some websites being refused by the proxy server.

v)Multiproxy Switch is easy to manage, easy to configure.

vi)Multiproxy Switch is an experimental addon. Experimental add-ons are newer add-ons which have not yet undergone our public review process. They are allpha or beta versions. I like to try out new stuff; It is only by experimenting do you get to know the rules of the game.

Doing It. Adding the Addon.

Step 2: Check on Let me install this experimental add-on. Hit Add to Firefox.

Configuring it. Adding Proxies. .
Ideally, after the installation, you must have a Multiproxy Toolbar below the address bar and a button in your Status Bar.
I personally don't like to dedicate my browser space to addons, so I use the smaller interface: the Status Bar Button and hide the Multiproxy Toolbar. You could let the Toolbar stay if you wish or right click on the toolbar and uncheck it, to hide it. You can see it again by right clicking near the Menu Bar and checking it again.

Now, to add proxies, select "Manage Proxies" in Toolbar or Statusbar menu, you will see this window: 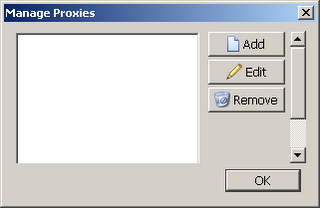 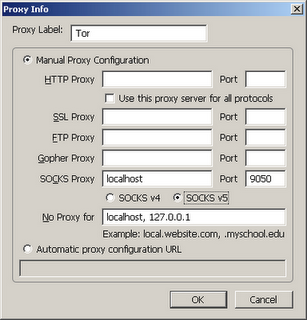 Now, you fill in the specifics and hit OK.


Switching Between the Proxies.
After you add the proxies, you will see them in the Status Menu and Toolbar Menu, just click one to use. In Toolbar Menu, select the proxy then click "Apply" button to use.